A two day guided trip exploring the fabulous Mahurangi Harbour, the coastal islands and Kawau Bay (depending on the weather).

Mahurangi is the centre of possibly one of the best boating, camping and fishing areas in New Zealand. It has  a number of excellent camping locations and offers quite amazing day and overnight trips.

Land based activities centre around the rich history of the area and conservation efforts to protect and support native species. 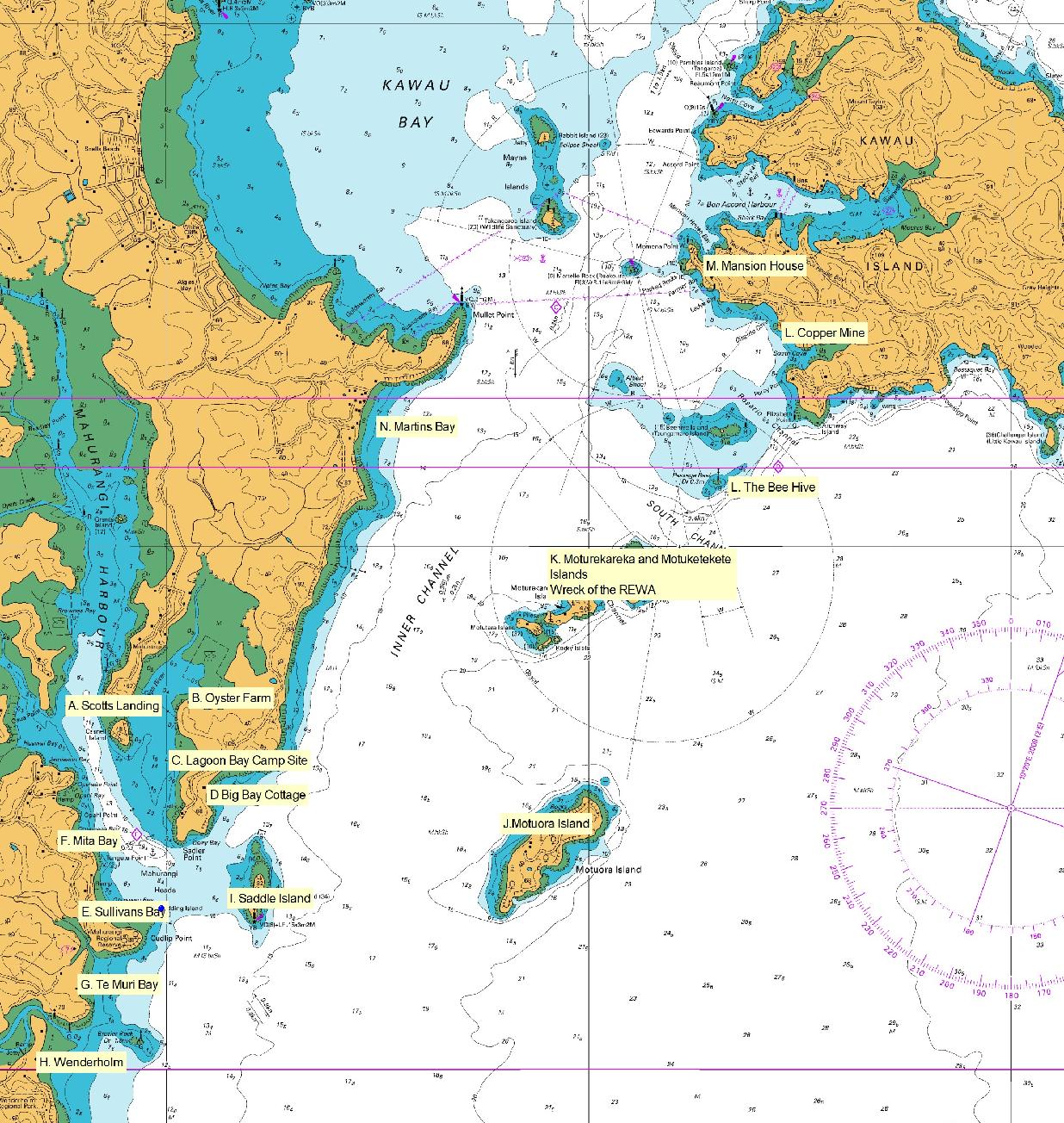 Some of the highlights of the area which can be visited depending on the weather are listed below:-

Sullivans Bay gates open at 6am and close at 9 pm. Sullivans Bay campsite is the only vehicle based campground in the beautiful Mahurangi Regional Park.

Camping is along the beachfront on a large grassy area, with some large trees to shelter under.

There is easy access to sea kayaking along the sheltered bays and heaps of walking opportunities to the lookout and other camping sites. The campground has long drop toilets and running drinkable cold water. Access is available to flushing public toilets and cold showers in te nearby public areas.

Saddle Island is a short paddle from Sullivans Bay. It has a beautiful long sandy beach on the North West side over looking the entrance to Mahurangi Estuary and several other mainland beaches.

Named after Te Haupa, an important Ngati Paoa chief, this small island has a small reef system on the North East corner that can produce some great fishing when the tide is right. Saddle Island is home to several bird species including, shearwaters that nest very close to the beach.

Te Muri has a lovely sandy beach which is negotiable by kayak in all but stronger easterly winds. It is one of the larger camp sites in the park and really is a lovely place. There are long drop toilets and running drinkable cold water.

You can access by foot by crossing the Te Muri Estuary at low tide and continue along Te Muri beach foreshore to the campground. It is approximately 1.3km and will take 40-60 minutes.

Scotts Landing is considered the gateway to the Mahurangi Harbour.

The original Scott family homestead is located on the beach front and is usually a peaceful haven with a gently sloping sheltered beach well suited for young children. 100 year old trees provide shade for an excellent and picturesque stopover or picnic area.

Lagoon Bay campground at Sadler Point, Mahurangi Regional Park (East) This campground is located on the northern end of Lagoon Bay in an open grassed area bordering the beach. It is only accessible from the water.

The beach is very tidal - at low tide you will need to walk 250m up the muddy beach.

Vine Cottage, which is available for rental,  is at the easterly end of the bay and over the hill is picturesque Big Bay with its own cottage which is also available to rent.

Mita Bay is about 300 m from Sullivans Bay - it is accessible by land by tramping over the surrounding hills, but by far the easiest access is by water.

The campground itself is really nice, every bay is beach front, there are loads of water taps dotted around the place and the shelter planting is mature enough to actually do the job which is fantastic when it’s blowing onshore.

The beach is a bit rocky but very workable at high tide. The most attractive feature is the shelter offered by surrounding hills and bush enclaves - a very cosy little place.

Motuora is an 80 ha island in the Hauraki Gulf Marine Park about 5km from Sullivans Bay.

An island sanctuary for native flora and fauna, the camp, which can cater for 75 people,  is near a Māori historic site and early European settlement.

Much of the original coastal forest and shrubland vegetation was cleared long ago by Maori and European occupants leaving remnant pohutukawa and karo/mahoe scrub growing on coastal cliffs.

Motuora has remained free of mammalian predators despite the island's long history of occupation and farming. There are no rats, stoats, ferrets or weasels or feral cats.

The island is a crèche for young kiwi chicks and a resident healthy population of approximately 100-150 birds remain on Motuora.

Paddling north from Motuora, the next stop is Moturekareka / Motuketekete Islands. These islands are a lovely stop for a break in a paddle to Kawau but also offer a cave which can be paddled through given favorable tides and moderate winds and the wreck of the Rewa.

The Rewa was sunk on purpose by Charlie Hansen, a legendary, colourful character who lived on the island for twenty years from the late 1920’s. Legend has it that he was “the front man” for a local syndicate, who wanted to circumvent the strict licensing and gambling laws of the day, by converting the REWA into a luxurious drinking and gambling establishment.

This plan did not eventuate as the Rewa did not settle on the seabed in the intended manner and instead was tilted, offering excellent shelter  for cruising kayakers.

Next stop is the “Beehive”  which is a little island to the south west of Kawau Island. It looks like it a tropical island with the white sand surrounding it at high tide.

It has many stunning views and moods depending on the time of day.

Kawau Island is one of the most Historic and larger Islands in the Hauraki Gulf. It is approximately 8 km long and 5 km wide and is a popular holiday resort for Kiwis and overseas visitors.

The Bon Accord Harbour runs nearly 3km in to Kawau Island, almost splitting the Island in two.

Originally purchased in 1837 from Maori, the Island was excessively mined for its deposits of manganese and copper. The remains of several mines are still accessible from one of the walking track that start at Mansion House Bay,

After mining the Island was transformed into a botanical and zoological park, and a wide variety of exotic and subtropical plants and animals where brought on to the Island, some of which are still evident today.

Mansion house is now owned and maintained by the Department of Conservation and has been fully restored to its former glory and for a small fee visitors are welcome to take a tour around the house.

Paddling up the Mahurangi River to Warkworth

The Town Basin features a new wharf, pontoon structure and the Riverbank Walkway which offer access to cafes, restaurants and shops and other businesses which are close to the wharf.

Paddling up the Puhoi River to Puhoi

Paddle into Wenderholm on about a half incoming tide and you can paddle the 8 km or so to the Puhoi township which is rich in history.

While there you can enjoy the pub with a pub lunch or coffee at the local cafe or enjoy the weekend markets. When you are done you can drift back down with the outgoing tide to be picked up at Wenderholm or paddle around the corner to Mahurangi.